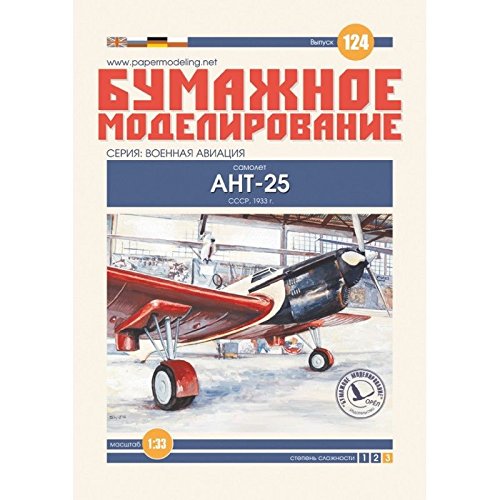 PAPER MODEL KIT MILITARY AVIATION ANT-25 AIRCRAFT OREL 124 Manufacturer: Orel (Ukraine) Scale: 1/33 Material: Paper Condition: New Number of sheets: 10 sheets of A4 ANT-25 was established several distance records; he was included among the exhibits of the World Soviet aeronautical exhibition in Paris in November 1936, there was an exceptional success. On the morning of June 18, 1937 start of the flight of the USSR, the United States was taken over the North Pole. Chkalov, Belyakov and Baydukova took the plane to the north. Over Canada aircraft hit the cyclone, which had long bypass. We flew at an altitude of 4-6 km. Oxygen was not enough – pilots lost power. Successive had every hour. Over the Pacific Ocean oxygen supplies ran out. I had to go down to the ground. On June 20, 19 hours 30 minutes Moscow time, after 63 hours and 25 minutes of flight, the ANT-25 landed at the airport near the city of Vancouver (USA). Over the ocean, and the ice had covered 9,500 km, of which several thousand in a blind flight. After just 3 weeks the crew of MM Gromov made another flight to America via the North Pole. Soviet pilots established in this new world distance record. The plane was in the air 62 hours and 17 minutes, breaking the distance of 11 500 km. In this model, it represented plane “ANT-25” in the color of the flight crew Chkalov over the North Pole in the US. Not a bad development, a good detailing, availability of silver paint. All this will make it possible to collect interesting and beautiful model with a wingspan of 1030 mm.