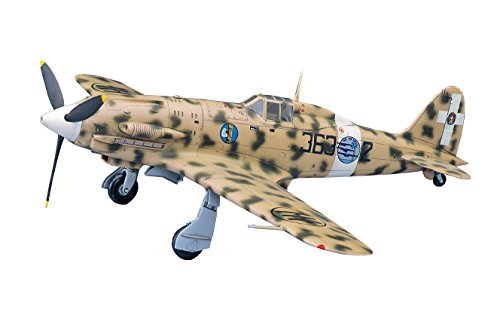 Highly detailed 1/48 scale assembly model kit of the Macchi C.202 Folgore (“Thunderbolt”), a World War II single-seat fighter aircraft operated by the Regia Aeronautica (“Royal Italian Air Force”). In the ongoing debate over which were the greatest fighter aircrafts of World War II, the Macchi C.202 is sometimes overlooked. However, a case could be made for the Macchi C.202 as one of the superb fighter designs of the era. Considered by many aircraft historians as being both beautiful and deadly, the Macchi C.202 was a very capable dogfighter, and it was well respected by fighter pilots who fought against it. Highly maneuverable, the C.202 was said to be capable of out-turning the British Spitfire in a dogfight. The C.202 was arguably the most successful Italian fighter aircraft during the Second World War, with some 1,200 units built by the end of the war, and most Italian fighter aces, including the top scoring Italian fighter ace of the war Adriano, Visconti di Lampugnano (26 aerial victories credited), flew the type. This Hasegawa 1/48 scale assembly kit features 79 parts molded in light-grey and clear plastic and high quality Cartograf decals for two versions (150 Gruppo and 153 Gruppo).