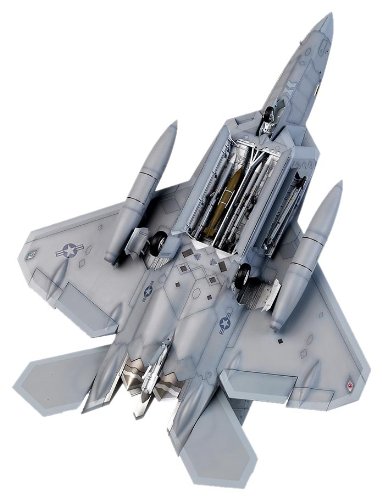 Finely detailed 1/48 scale assembly model kit of the Lockheed Martin/Boeing F-22 Raptor, a fifth-generation fighter aircraft (sometimes referred to as generation-five or “gen 5” fighter) currently in squadron service with the United States Air Force. As of 2009, the Raptor is the only known fifth-generation fighter deployed for active service by any nation in the world. The Raptor is a highly advanced air-superiority fighter aircraft that encapsulates the latest in aircraft design technologies that include stealth, supercruise, thrust-vectoring, and the highly advanced AESA radar system, just to name a few. As a fighter aircraft, the Raptor is capable of out maneuvering any generation-four fighter aircrafts in service today and thus seizing complete control of enemy air space. In addition, the Raptor is also a versatile platform that can perform a variety of ground attack and electronic warfare missions. The Raptor is considered by many the single greatest fighter aircraft ever produced to date, and until the Raptor encounters another gen-5 fighter sometimes in the future, it will remained a dominant force in the skies over present and future combat theaters for the U.S. Air Force. This beautifully detailed big 1/48 scale assembly model kit of the F-22 by Academy features: Optional open or closed weapons bay. Latest air-to-air & air-to-surface missiles included. ‘Cartograf’ premium quality decal included.