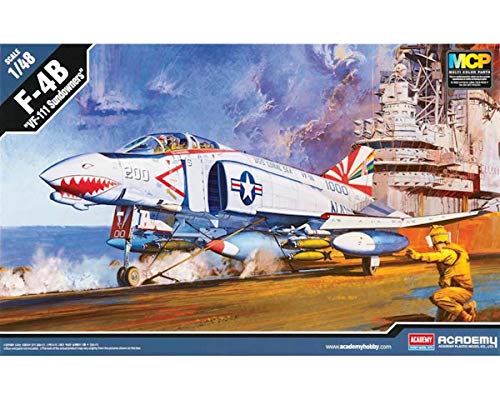 The F-4B is a tandem, two-seat, twin-engine, all-weather, long-range supersonic jet interceptor fighter/fighter-bomber originally developed for the United States Navy. Fighter Squadron 111 (VF-111), also known as the Sundowners, was the designation held by two U.S. Navy fighter squadrons from 1942 to 1995. The first squadron, initially designated VF-11, served as an active Pacific Fleet Fighter Squadron until its disestablishment in 1959. At that time, another squadron then assumed the designation until its disestablishment in 1995. In November 2006, VFC-13 Detachment Key West was redesignated as VFC-111, taking on the ‘Sundowner’ insignia and call sign.

Academy Plastic Model Co., Ltd. is a Korean plastic model, chemical, and toy company. It is headquartered in Uijeongbu-Si, Gyeonggi-do, Korea and was established on September 1, 1969. It holds three headquarters: in Seoul, Korea; Gelsenkirchen, Germany; and Rosario, Cavite, Philippines. Academy has developed and supplied over 500 products to more than 60 countries worldwide, and since 1989, Academy has won several Modell des Jahres awards for its product quality.